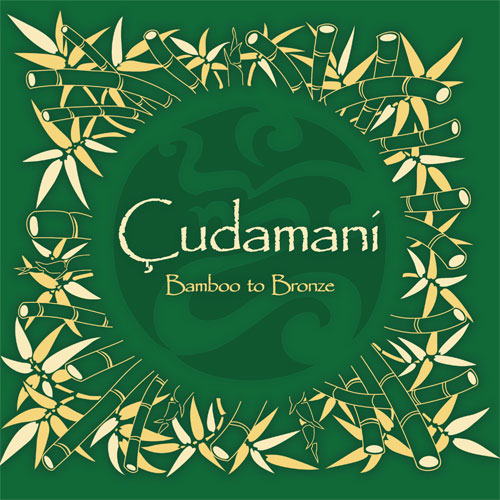 Buy on CD Baby Buy on iTunes Buy on Amazon

Bamboo has sustained life in Bali since the beginning of time. When a baby is born, a sharpened piece of bamboo cuts the child’s umbilical cord. During rites of cremation, it is used to carry the deceased into the fire. Bamboo is used to cook, build, protect, and to create music. Bronze revolutionized music during the 16th century Golden Age of King Waturenggong, thus launching an era of performing arts that continues today. The musical potential of both resources is explored by Çudamani in Bamboo to Bronze.

From the simplest offerings to the most complex ceremonies, Balinese rituals share a simple, yet elusive purpose – to create and maintain harmony between the three worlds of Nature, the Divine, and Humanity. Çudamani created Bamboo to Bronze out of love and respect for these worlds, drawing upon the richness of bamboo, bronze, and the human voice.

“Pengaksama” begins by asking forgiveness. “Galah Hening” / “Bhoma” is a suite inspired by the quiet before dawn and the power of the Forest.

“Pawisik” was born from Gusti Niang Raka’s dream in which two heavenly beings asked, “We would like to dance. Where should we go?” Niang – a master offering maker – said to go to Çudamani. “Pawisik” is an offering to the divine spirits that watch over us and an expression of deep gratitude for the many blessings we have received. A core concept of Balinese philosophy is the balance of opposing powers. In “Yatna,” the forceful and sometimes playful rhythms are inspired by the protective male spirit – the complement of the protective female spirit of “Pawisik.” Inspired by an offering for processional ceremony, “Tebog” follows the classic lelambatan structure that is symbolic of the harmony between the Divine, the Human and the Natural worlds.

“Mewali” honors the unique qualities and strengths found in three stages of life: the playfulness of childhood, the energy of youth, and the wisdom of age. “Kebyar Perak” is a beloved piece that reminds us of the lively artistic genius and many blessings of our teachers. Master artists from North Bali worked with Çudamani to reconstruct “Tari Legong Pengeleb.” Dynamic rhythms and melodic shifts are evidence of North Bali’s genius in Kebyar – a musical genre that began a century ago. “What Really Happens at Rehearsal” is a taste of Çudamani’s playful spirit, inspired by the vocal traditions of East Bali’s genjek and the healing interlocking of kecak. For Çudamani, the arts are not simply about a “performance,” but about creating a life full of joy, friendship, and harmony.